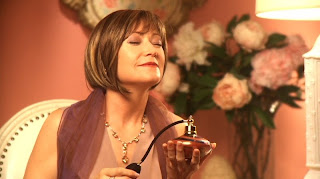 The last third of Woman's Picture involves an incident with a bottle of perfume.

The bottle sits out on Miriam Masterson's dresser, away from everything else. It belonged to her mother. Miriam doesn't seem to wear it, but at night, sitting there alone, she sniffs from it, stepping into some parallel dimension of stillness beyond regret, self-doubt, and the hamster wheel of ceaseless daily thoughts which keep her outside herself. During these private moments--the only time you see her alone--she gets a faraway look on her face; later, when you watch her selling perfume on TV, you believe in her sincerity, because she goes to the same faraway place, and you see that she finds ways to genuinely relate her own solitary experience to her viewers, however heightened and well-rehearsed the delivery.

She visits her mother in a nursing home every day. She sits on the edge of the bed, staring at her. Mentally, her mother has left the building. She's in her own distant place, and you know on some level that the perfume allows Miriam to go there, too, looking for her. Later, when her stoner boyfriend of five years breaks the bottle, Miriam flips. It's a trigger. A portal to another world closes. There's no getting back through. Russell can't understand why she's so upset. A pothead has his own parallel universe and the door is always a bong hit away.

Miriam wakes him up on the couch. You could hear him snoring when she came in, right before she discovered the broken bottle in the bathroom sink. Miriam spilled what was left of the perfume--mere drops--as she picked up the pieces of glass, and as she and Russell fight she keeps thrusting her hands into his face. You get the idea the perfume is evaporating as they speak. He'll buy her another bottle, Russell keeps saying. There was a little bit left: did she see? He doesn't get it. That was her, Miriam says. That was her in a bottle. There will never be another bottle like that. Your mother? says Russell. What are you talking about? The house is full of her shit. You never even liked that woman, he says. All she ever did was tell you what a fuck up you were.

The bottle I picked out for the scene at an antique store was totally different than the one I remember. It had a cut-glass stopper, shaped like a dagger. The stopper was bigger than the bottle. The bottle I remember was a tiny thing. It fit comfortably in the palm of my hand. My grandmother kept it in her medicine cabinet, hidden between pill bottles, ointments, band-aids, bobby pins. I used to lock myself in the bathroom to smell it. I never put it on. I couldn't risk being discovered smelling of it. But for years I enjoyed it behind closed doors. It smelled of violets and faint aldehydes, powdery and sweet, and reminded me not of my grandmother exactly, but of fantasies I entertained about her.

Toward the end she was frail. She seemed to have always suffered from arthritis but by her seventies her hands were so disfigured that she couldn't button her own shirts. She managed to light her cigarettes but it took her several minutes. You didn't dare offer to help. She spent the year before her stroke in a brace. She was so weak she couldn't hold her head up, and the doctors worried she'd break her neck. She never wore perfume. I have no idea where she got the bottle in the bathroom, but I know it must have meant something to her because it was very old, maybe older than she was, and whatever else changed in her house, whatever else moved around, that bottle was always in her cabinet, in precisely the same place.

I imagined she probably locked herself in the bathroom to smell it, the way I did, afraid that if she wore it some secret part of her self would incriminate her. My grandmother was a tough woman--always wise-cracking, always a wry smirk, a chain smoker. I never saw her in anything but pants and shirts--save for the times she square danced, and that was more theatrical than persuasive. It was as if she would be mistreated, like a woman, were she to act and dress like one. She was mistreated anyway, but at least in male clothing she could pretend, like a man, not to be bothered.

I like to believe she had hidden reserves of sensitivity she couldn't afford to declare. She was surrounded mostly by men, with only her daughters and the wives of male friends to give her away. The year before she died, I stole the bottle. I knew no one would give it to me, and I couldn't let her know it meant something to me. I think it would have been thrown out when my mother and her sisters took inventory. I was willed a stuffed coyote instead (also in WOMAN'S PICTURE); a more masculine legacy. I brought the violet perfume home and put it in my own bathroom cabinet. I want to say it was about an inch and a half tall, but practically full. I kept it there after she died.

Early one morning, she had a stroke. She was alone, in the bathroom, of all places. My mother arrived and found her on the floor. She wasn't wearing her neck brace and couldn't keep her head up. She was lucid for moments at a time but mostly disappearing into nonsense or silence. She was rushed to the hospital and put on life support for several days. Seeing her in the hospital was horrifying, because it wasn't her anymore. It wasn't anybody. I was glad I'd taken the perfume.

We were cleaning house one day and I heard glass break. It had a weird sound of finality to it. I rushed into the bathroom and my boyfriend was already making excuses. The bottle had fallen out of the cabinet, shattering on the sink. He'd saved what was left, he kept telling me. I can't explain how I was feeling, other than to say it was like someone had killed my grandmother. I don't think I've ever gotten any nearer to what people mean when they say they flew into a rage. I was essentially possessed. The bottle hadn't even been labelled. I still don't know what the perfume was called.

Ten years later, as we filmed the confrontation between Miriam and Russell, I kept taking Ann Magnuson, the actress who played Miriam, into an adjoining room. It was near the end of the shoot and I was exhausted. Various resentments had been stuffed to get through the thing, but I let them out in the controlled environment of that room, trying to free her up into some irrational anger, some response or place beyond justification, cause and effect. It had to be primal. It wasn't about the relationship. It was about losing someone. I wanted her to fly into the room, to poke Russell awake as though she were stabbing him. I wanted the camera to linger on the broken bottle, the spilled perfume, the finality of it never being whole again. The bottle I found was perfect; only the stopper remained intact, shaped like a weapon to drive home the injury.

I wanted a special kind of cluelessness to Russell's response. How can anyone be prepared for that--or truly be blamed? How can anyone know what the bottle held for you? It's the curse of trying to maintain some sense of significance in a world full of stupid spinning collisions, where flimsy things are broken on impact, their parts flying off in opposite directions. I remember my grandmother's body jerking from the life support machine, as fragile as that stupid bottle, no more or less impermanent, certainly just as tiny in the larger scheme of the universe. I relate to the smile on Miriam's face as she sells some other bottle of perfume on a TV show which offers that fantasy of attachment and personal investment to anonymous viewers. There was a running dialog as we filmed, questioning whether Miriam was for real. It was such a non issue for me, ultimately. She seems to be locked in a bathroom of her own making, and you could just as easily ask how real the world outside the door is. Who's to say the film we were shooting wasn't real, invested with those ghosts?