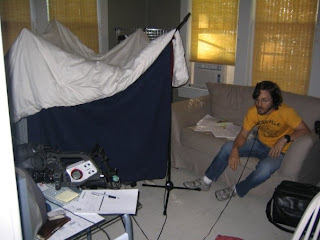 I've been looking back at the experience of my first film a lot lately, not just because it's been offered distribution but because it was a vastly different endeavor than the one I'm working on now. We edited that first film, THE WAY I SEE THINGS, over the course of several years, then I started taking it around to festivals. The music we used consisted of tracks already recorded by Harlan T. Bobo. There really wasn't much to the process besides a lot of reflection and attention. It was stressful, particularly when I engaged in the festival experience, but it was pretty manageable.

WOMAN'S PICTURE has been something else entirely. A bigger cast, for one thing, some of whom have management. That's a new one for me. A bigger crew, too. There are more people to organize when something needs to be done, and still, a year later, much needs to be done. Music issues, edit issues, legal issues, sound issues, marketing, contracts, a thousand niggling details, little stray threads it takes forever to get woven into the larger tapestry.

These are all long term relationships; each one a marriage. You're not always the best people for each other. You got involved because of this child you had together, the film. You try to work around your partner's personality to raise the kid the best you can. It can be kind of combustible. Not everyone speaks the same language. I spend a lot of time trying to express myself as clearly as possible with a pathetically inept vocabulary.

A few weeks ago, we recorded piano cues for the middle section of WOMAN'S PICTURE. It was frustrating, trying to get what I wanted. I had no facility for the instrument and no real idea how to communicate about it. I'd worked with the engineer once before, but not with anyone else in the room. I felt the same way in the sound studio, where over the course of a week and a half I worked 10-15 hour days, one on one, with a succession of three very different personalities.

Ultimately, THE WAY I SEE THINGS was housed on one hard drive, with another as a back up. WOMAN'S PICTURE is spread across four drives, and just keeping track of those can be a major ordeal.

I'm tired and I find myself wanting to move on. I remain incredibly committed to the film, but every other relationship in my personal life has suffered for it. On the rare occasion I do speak to my family these days, I imagine they must think I have a drug problem. It's as if I've disappeared off the face of the earth. My behavior doesn't seem to make sense to them. It doesn't make sense to me. Making a film, not just shooting it but producing it, finishing it, isn't a real time, real life enterprise, especially when working outside of a context most people could understand (Los Angeles, for example). No one wants to hear about someone else's job, especially when it bears little recognizable relation to your own. And this one never seem to end. It's been very difficult to cut it off at the end of the day and to make myself available emotionally or even just on a casual, conversational level.

THE WAY I SEE THINGS was shot over a month and a week. WOMAN'S PICTURE was basically a twenty day affair. Maybe I'm romanticizing the past. I don't know. The shoot for WOMAN'S PICTURE was chaotic and ambitious, though it didn't feel that way to most of the people involved, I don't think. It was a madness I kept private and contained, the way you do on set, trying to inspire everyone with confidence, as if what you're all endeavoring to do is the simplest of things and you have everything you need to accomplish it. At the same time, it was one of the most enjoyable experiences of my life. I finally felt like I understood, viscerally, what it means to fit in. I felt for that twenty day period that I was a fully functional, fully feeling social being. There wasn't a problem I couldn't solve. There wasn't a piece of that process I didn't find a way to authentically own. A 10 thousand dollar garage door broke, leaving all the equipment exposed. We got a flat tire on the light truck. People didn't show up on any given day. None of it mattered much to me. I was beatifically happy.

I look at other filmmakers who've worked this way and study them with a new scrutiny. What kind of cost comes from this independence? Doing it yourself is great but I'm now trying to build a team of trusted collaborators, not just for that exciting two or three week shoot period but for the long haul, when, during the months following the recording of footage, it all has to be assembled and carried forward. I'm trying to build a better vocabulary and a support group of translators ahead of time, so that as this gets more complicated I can be more of a person off set as well as on.

(Above is a picture of our homemade sound booth, made of sleeping blankets and mike stands, during post work on THE WAY I SEE THINGS, 2007-8)

Posted by a blog by Brian Pera at 11:11 AM No comments: Links to this post