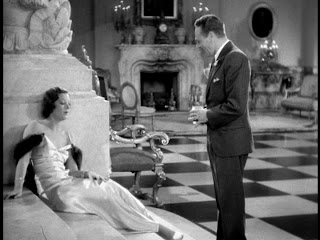 "I find that the actual shooting of a movie is a very painful agonizing process of constant minor disappointments. What you've imagined ideally frequently cannot be achieved with flesh and blood and with real circumstances, so you feel with each scene that you're losing something. And it's a heartbreaking process. Frequently, when I wind up with a thing I feel, 'My God, it's no good at all, it's terrible. It's so far away from what I thought it would be.' But, if you try hard enough, it comes out good enough, and exciting enough."

Posted by a blog by Brian Pera at 8:36 AM No comments: Links to this post

Calpernia Addams in: A Woman's Picture 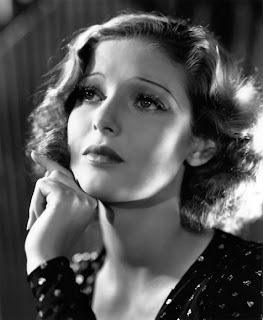 Recently, I filmed a short here in Memphis, a week-long production with a cast of three and a crew of four. One of the actors was Calpernia Addams, whom I'd first seen on TV, subsequently contacted by email, and eventually met at Outfest in LA. Like many people who meet at film-related events in Los Angeles, we exchanged compliments and expressed what seemed like a genuine interest in working with each other. Following the template, it might have ended there.

I had hopes of including her in one of several possible upcoming projects, but planning those things can go on forever, and it could have been months if not a year before any of the things I had in mind went into production. I'd never written a short, and I don't think I intended to when I started the one we eventually worked on, but I wanted to work together sooner, to capitalize on an enthusiasm we both seemed to have for working in general. That kind of enthusiasm goes a long way on the kind of modestly budgeted films I make. It overcomes a lot of obstacles, placing them within a bigger picture so they seem smaller, less insurmountable. Whatever its genesis, writing the short was a totally freeing experience for me. I'd always begun whatever I wrote with some advance limitation or convoluted restriction meant to guide me. Instead it often ended up stumping me.

For novels, that meant coming in under a certain number of pages. For movies, it meant all kinds of things; that certain events should happen by certain page numbers, that characters should develop in specific ways. I resist the external influence of "how-to" manuals as much as possible, and grumble at conventional storytelling or the impositions of narrative guidelines, but I'm not immune to those pressures, and often end up imposing them myself in a roundabout way. The short had no rules because I went into it with no preconceived ideas or expectations. It could be however long felt right. Nothing had to happen. The characters could be as opaque as I wanted them to be. Consequently, I kept discovering them and learning from them after the script was finished. 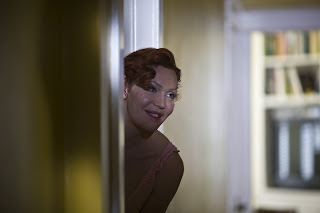 The script was what I guess I'd call a vehicle for Calpernia. I openly thought of it that way. I wanted to play around with the old-fashioned, maybe outdated idea of a woman's picture, where the focus is on one woman's arc or movement through a story, and everything revolves around her in some thematic way. Gaslight, A Woman's Face, Mildred Pierce, et al. An added phenomenon of those films was that the personal life of the actresses often informed and augmented the characters they were playing. Calpernia fit the genre's requirements. She's recognized publicly in a way which makes people feel they know her, influencing the way they receive whatever work she does. Physically, she has the look of a classic Hollywood actress, with big, soulful eyes, graceful carriage, and an hourglass figure. She looks very much like pictures I've seen of Loretta Young, and has a similarly dignified air about her. 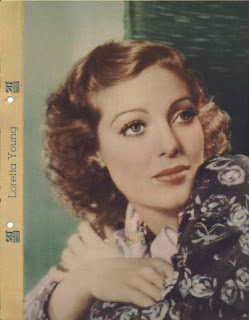 In some ways, those qualities put her out of step with contemporary fashion; in other ways, they make her seem timeless in a fascinating way. Ingrid, the character she played in our short, shares this dichotomous relationship to her environment: the story suggests that as a child Ingrid was consciously influenced by the women's pictures she watched with her grandmother, and has subsequently modeled herself on the actresses in them as a form of homage and resistance. But there's an inner quality to Calpernia which was equally appropriate to the material, suggesting reserves of strength and determination hidden under an apparently placid reserve. It's a spark she gives off. 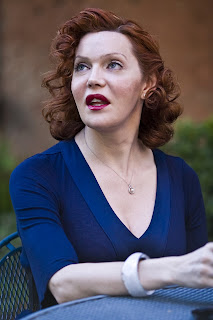 As an actress, her most interesting qualities are magnified by the camera. In the role of Ingrid, a woman who returns home after ten years to take care of unfinished business with her estranged mother, Calpernia made small adjustments and subtle expressive decisions, all of which paid huge dividends on screen. She has an uncanny sense for the economy of film work, how little is needed, how just a touch registers much more expansively than a wallop. Many actors give you wallops. They're trying to cover all the bases. You keep asking them to simplify. They keep getting broader. They have very little sense of scale, which is a tricky thing for the best performers. Calpernia measured things considerably, creating a complex, insular, intriguing characterization with precisely judged calibrations.

The first day of the shoot took place entirely in the back seat of a rented town car. We circled the neighborhood endlessly, trying to get the right light, the right sound. Finding roads without too many potholes was an afternoon-long endeavor, and by the end of the day, when it came to parked scenes, we had jets to contend with. We'd set up under the Fedex flight path at rush hour, meaning ceaseless interruptions and crazy-making re-takes. The first scene required Calpernia to be very focused. The car approaches Ingrid's childhood neighborhood, a source of panic and dread for her. 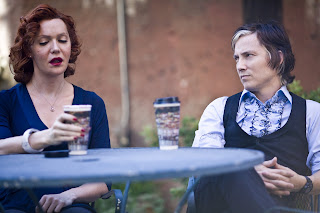 Calpernia's performance felt too small to me at first. I have trouble gauging people I act beside in a scene, until I see the dailies for the first time and understand better what they're doing, if anything. The changes Calpernia's facial expressions went through were subtle enough I didn't even really see them until we watched the footage. When I did see them, I forgot about them; the shot was disembodied from the scene it will eventually be seamlessly pieced into, but totally compelling, and her face told an entire story on its own, I got so wrapped up in it I forgot about the one I was expecting. The performance was taking place on a more subterranean level, transmitted through the eyes from a place much deeper than her face.

Women's Pictures were often about suffering silently, a personality under duress which eventually transcends some limitation, whether by conquering it or simply persevering. Critic Molly Haskell characterized the genre as being about ordinary women who become extraordinary through sacrifice, choice, affliction, and competition. The story of Ingrid somewhat subverts that format, presenting a female character who is considered extraordinary in various ways from the outset, not least because of her beauty. Eventually, she disproves some of the assumptions leveled at her, proving to be not quite as different from those around her as they've chosen to believe.

In an essay about the woman's picture published in Jump Cut, Deborah H. Holdstein references Sartre's "perfect moment" as an aspiration held by the women of these women's pictures, a drive they have to fulfill society's expectations of them by arriving at a point which embodies their "potential" as ideal citizens of society. Sartre condemned people who sought only to fulfill society's ideal of them, Holdstein says. In doing so, they sacrifice their individuality. 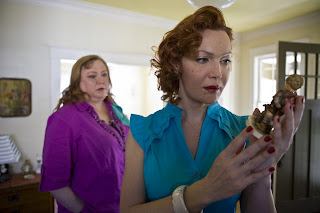 In contrast, Ingrid's individuality was imposed on her in certain ways, and embracing this idea of "difference" and the scrutiny which has come with it has been a trial. She's endured it admirably, but the story hinges on her continual insistence on being ordinary, free from the pressure to conform to an idea of difference. Calpernia brought to the role a remarkably rich and adroit comprehension of how that difference operates beyond the person said to possess it, the effects so-called difference has on other people, how it modifies their behavior and conditions their thinking. Difference has as profound an effect on the people who impose it and come into contact with it. They often just don't see it, because the difference becomes a way for them not to look at themselves very closely. Calpernia expressed this delicate balance wonderfully, complicating the role in ways which would inevitably surprise the audience as much as the characters they were watching.

Ingrid's perfect moment is something she ultimately keeps very private, in direct contrast to the classic woman's picture storyline, where the perfect moment resolves the film like characters walking off into the sunset. Ingrid's moment is something outside of society, a vision she's held onto for herself, the consummation of a relationship she's imagined, not with a man, as was often the case in these movies, but with herself; the actualization of her desired self-image by accessing areas which were designated off limits to her. Her chief resistance involves refusing to be marginalized. There are no "Big Moments" in Calpernia's enactment of Ingrid's resolve and arguable victory. Rather than explaining her perfect moment for the audience she holds it close, behind her eyes, subverting not just the idea of total access to the women in those old films, but the sense that conveying emotion requires a recognizable pattern of transparency. It's a radical revision of the Loretta Young-era star figure, normalizing her character from the outside in, and a fascinating performance to watch, doing quietly, in the space of thirty to forty minutes, what most actors need several hours and a couple of big speeches to accomplish.

[Top photo and third down, Loretta Young; all other stills from the short "Woman's Picture", photography by Sean Davis.]
Posted by a blog by Brian Pera at 3:23 PM No comments: Links to this post