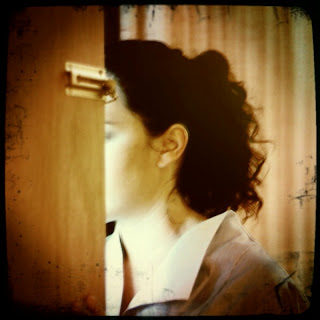 Building sets was a big part of making WOMAN'S PICTURE for me. So many of the characters are trying to create and control their own spaces, spaces which vary in degrees from total constructions to practical locations, just like on a movie shoot. What makes each space real has more to do with powers of imagination than anything else, and the level of vigilance used to enforce certain desired impressions. I wanted as much as possible for the cast and crew of WOMAN'S PICTURE to be just as engaged and invested in the spaces we were creating, everyone working hard to cultivate and sustain a collective sense of reality. I'd never built sets before. I'd never really wanted to. But WOMAN'S PICTURE had a lot to do with a certain kind of movie and a certain kind of fantasy-making, and things like shooting on a sound stage, with a truck of lights and dressing rooms and sets we'd built from scratch using materials out of the local Home Depot seemed a necessary step towards understanding the characters we were creating.

Miriam Masterson's QET Home Shopping Network set is a total fabrication, but for her and for a lot of her viewers it takes on varying degrees of reality. It's the fantasy of a room which broadcasts nationwide, becoming other rooms in other people's homes, one room among many inhabited by thousands of individuals, mostly women. Miriam goes into a different headspace when her show goes live. The camera filming her and the individual TVs broadcasting her show frame Miriam's set, creating the illusion not only that the set is real but that it extends indefinitely, intimately attached to additional, unseen rooms. Miriam's set works like a movie set; it's presented selectively through mis en scene and performance. The strength of Miriam's personality invites people in, as if she's sitting in her den. Her viewers join her, sharing the room. She speaks to callers on a telephone, though they're connected through the studio's hidden technology. Miriam's show pipes into the other women's stories in WOMAN'S PICTURE, making her a narrative convention in more ways than one. She serves to connect the segments of the movie the way she connects her viewers, enforcing the illusion of interrelationship.

The studio brass feels locked out of this space she's created and they engage in a struggle to gain access and control over what goes on during her show, in her room. Miriam fights to maintain her sovereignty, essentially trying to lock them out. All of the women in WOMAN'S PICTURE are involved in trying to keep someone out of the room. You see people locking doors a lot. You see them barring other people's entrance. Loretta talks to Joan, her boss, through a chain lock. When she does let Joan into the room, the two stand awkwardly, several feet apart. Loretta doesn't invite Joan to sit down. She starts when Joan makes a move toward her, as if wary, treating Joan like an unwanted intruder. For Loretta, the motel rooms she cleans are as much fantasy spaces as Miriam's TV show. When Loretta does fantasize, she pictures herself on TV, in black and white, the way she experiences Miriam in the maids' break room. She doesn't imagine herself as Miriam but as someone in the old movies Miriam describes having watched with her mother as a girl. Loretta's injury occurs when someone returns to one of the rooms she's supposed to be cleaning. She's deep inside an ongoing fantasy and the room's real occupant comes back unexpectedly. I liked the idea that a motel's rooms keep changing occupants. The rooms keep getting inhabited by different people, each enacting some specialized fantasy of escape or isolation. I liked the idea of using one motel room to serve as all the motel rooms we show. We changed the furniture around but the basics stayed the same, increasing a sense of interchangeability and deja vu.

Ingrid I think has figured out a way to keep this idea of a room with her at all times, making it portable, a state of mind rather than a place of being. She makes whatever space she inhabits that "room", the place she can live out her fantasy self in. She could walk into your room and in that sense it becomes her own, because she leaves you trying to make your way around in it. She changes the furniture around and commands the space according to her own tastes. I feel a lot of empathy for her mother, Gladys, because Gladys isn't really there yet. She might never get there. Gladys has her house, and she tries to control all the rooms in it, so that she can maintain a fantasy she's been enacting for years, since she was a child. She grew up in the house; it belonged to her mother; and when she was a girl her mother controlled the house and excluded her in various ways from feeling ownership of the rooms the way she controls it and wields that power herself now. She tries to wield it over Ingrid when Ingrid and Mackie come home for a visit. She makes Ingrid stay upstairs in her old attic bedroom. She won't let her stay downstairs in her grandmother's old room. Gladys has changed the room anyway, making it her own. But Ingrid is used to being told where she can be and who she can be there and has evolved past that to a degree her mother wouldn't begin to understand. Her visit ends abruptly on bad terms and Ingrid moves to a hotel room with Mackie. Gladys has the house to herself. One thing we never showed was Gladys' bedroom. You feel you see every room in the house but her own. I wanted it to be the one place the viewer doesn't have access to, so that you'd wonder what it must be like and want to get in.

Posted by a blog by Brian Pera at 8:39 AM No comments: Links to this post