Seeing is Relieving: The Paintings of Melissa Dunn 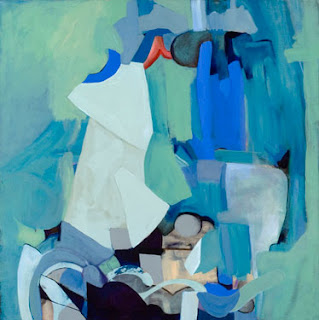 Last night, I saw one of the more beautiful paintings I've ever stood in front of. It felt like more than a painting but it wasn't trying to be an exclamation point; it was happy to suck in the world and simmer it in the frame, and going over to it was like checking in on a stew. I couldn't figure out what the cook put in it to make it smell so amazing. Some cooks make you immediately ask the question. "What's in it?" You want to break it down and understand the effect it has on you. Anywhere I went in the room I could see the painting stewing over there. The greens in this thing made me so happy and weirdly emotional. There were shapes and shades in there that reached little pockets of memory I kind of allow to atrophy without realizing it. I feel like that painting understood something and if I got alone with it I might begin to understand it too.

Melissa Dunn is an amazing artist. I've been enjoying her work--really, her point of view--for over fifteen years now. I feel like I've been having a conversation with her paintings, and each time I come back to them they've been out living a lot more and know so much more than I do. Whenever I make a film and I start thinking about color, I think about those paintings and about Melissa's house, the way she arranges things or allows them to arrange themselves--then trains my eye to see it all. Last time, I put her paintings on screen, I framed them with the movie I was making, placing them in the natural setting of the characters. In a lot of ways that film is an attempt to have a conversation with Melissa's work, to get at the effect it has on me by putting it in front of the viewer, so we can kind of look at it together. I think of the characters and the audience being influenced by the paintings around them the way I am in real life, in ways we aren't even aware of.

Melissa's a great writer. Many artists have no idea how to talk about their work, or they have an idea but it's an outside idea; they go out where you're standing and try to look back at it from your point of view in a way that you can understand or relate to. It's kind of bizarre. When asked to "talk about" our stuff that's where we tend to go, without seeing it. Maybe keeping a blog has changed that for Melissa. She can speak to you from in there and bring you in now in ways I don't remember her doing before. Blogging has given her the ability to edit her own magazine, not just in words but pictures, and not just pictures other people have taken but her own. She sees something, zeroes in on it, snaps it, posts it, and talks about it from the inside on her blog. I don't think I've read a more lucid artist statement than the one she's posted for her show at Buckman Center, where I saw this green stew. For once, I felt like I was having a conversation with the artist, rather than with the conventions presented by the gallery experience. I go back to Melissa's blog all the time. I've never seen someone capture her world and work so well--not just what's in it but how she apprehends and engages with it and the words she puts it all into. You can see all the intersections there between world and work. Melissa uses words like she uses color.

In my first movie there's a little bit where one of the characters is walking about the room straightening things up. There was a bench there--it was on set when we arrived. But I'd bought a dozen or so colored pillows from the thrift store to decorate it. And I asked the actor to stop and notice these as he was moving around, to zero in on them and attend to them. In the film he starts arranging them. He goes into a tiny fugue there. That's how I imagined it, anyway. The colors drew him in, and he engaged with them, and carried that schema away with him. It was kind of a rescue from the relentlessness of his thinking. I think maybe that was yet another tribute to Melissa.

Posted by a blog by Brian Pera at 8:22 AM No comments: Links to this post