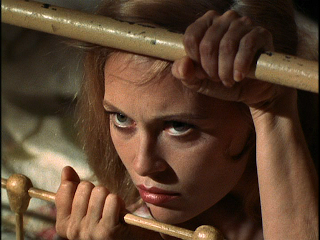 "All the changes upon changes. A scene is stretched. A scene is too many things. It has too many subtleties. Or too much pathos. Or too much humor. A scene may be replaced by an alternate. Or the scene doesn't work until it's a composite of alternates. Maybe it's cut entirely. And with it gone other scenes don't work. The dialectic of film is that every time you add dimension, it changes what went before and after it to a degree..."

"To find out what isn't working is much harder than putting it together in the first place: changing and reshaping is more difficult. Maybe to get it to work you have to enter the scene differently. Or leave it differently. It's usually not a matter of tempo - or snapping it up. That I can do in my sleep. It's a matter of not playing the right person at the right moment, or hanging on a moment with another character. And that's what you want to emphasize. But then it doesn't work because it undercuts the next moment in the next actor's reaction."

Posted by a blog by Brian Pera at 7:23 AM No comments: Links to this post 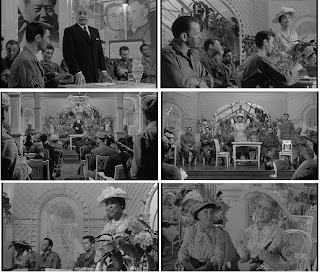 The editor plays an invisible part in a movie. The only people who know what goes on in a cutting room are the editor and the director, anybody else who happens to be there, the flies on the wall. You can't evaluate the work of an editor unless you are there, in the cutting room, because an editor can do wonderful things with a lot of bad footage, or he can perhaps destroy a lot of good footage, or a director may deserve much of the credit for the editing decisions, good or bad. There are all kinds of permutations, and you just can't put your finger on why it's a wonderfully edited movie or who exactly deserves the real credit. I'm in the academy and vote for the Best Editing Oscar every year, but my decisions are based more on intuition than knowledge, and I suspect that's true of the other voting members, too."

(Photo: sequential stills from the tea party dream sequence in John Frankenheimer's Manchurian Candidate. "The dream sequence was one of the most amazing pieces of virtuosity film editing ever done. According to Frankenheimer, they shot the same scene four times, with four different combinations of circumstance." The Manchurian Candidate: A Photo Study)
Posted by a blog by Brian Pera at 8:54 PM No comments: Links to this post 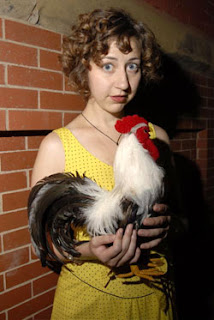 Some faces are made for cinema. Expressive from nearly any angle, alive in repose, they draw the eye no matter where they are on the screen. Some of the most cinematic faces are made most peripheral by filmmakers, belonging to what Hollywood calls character actors, a term which basically identifies people who have big chemistry on screen but don't fit into a specific, narrowly defined, marketable profile and couldn't carry a picture and therefore are delegated to the background or come in sideways, side-"kicks" like Thelma Ritter, who insinuated herself memorably into many a mise en scene by wisecracking from outside the established perimeters of the two shot.

Kristen Schaal has a face which pulls its own weight amidst what is already an unusually strong ensemble cast of character actors. She plays Mel, the number one fan on Flight of the Conchords, a show which suits her style perfectly. Her role is all about making her fellow characters and the audience uncomfortable and it makes perfect sense she won the Andy Kaufman Comedy Award, because she excels at this kind of comedy. Her baby girl voice works in concert with silver dollar sized eyes to make the most inane bit of dialogue sound remarkably obscene. The shape of her face is straight out of Dust Bowl Dorothea Lange, an impression reinforced by what has started to seem like a trademark bob. Any other hairstyle would seem wrong on her, though that might just increase the effects of her awkward comedy.

She often steals scenes in Flight of the Conchords. She gives the sense something else has happened, insinuating with those eyes and that curled upper lip, which disappears when she smiles, that something lascivious is or might be going on. Her performance has the reckless quality of Sandra Bernhard's performance in Scorcese's King of Comedy. You feel she has nothing to lose and might do anything. If the camera moves a little to the left or right, she might cock-block it, killing its easy seduction game. She might not know what to do with your attention once she gets it, but she's fearless enough to wing it. Her ancestors are Carol Kane, Judy Holliday, Kaufman, Bernhard, and Judy Greer, a distant but related cousin, more aggressive in her sexual energy but just as off kilter in means.
Posted by a blog by Brian Pera at 2:00 PM No comments: Links to this post